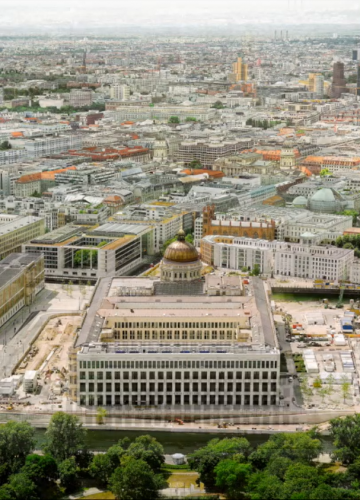 Frank Thiel’s commitment to capturing the constant transformation and development of Berlin for almost three decades has become an integral part of the city’s unfolding history and its most important photographic record. For his #IntheStudio film, Thiel examines the closure of the former East German's Palace of the Republic and its subsequent replacement with a partial reconstruction of the historical Berlin Palace. “More than any other place in post-wall Berlin, the site I’ve chosen as the subject of this video is inextricably tied to seemingly endless and often irreconcilable debates and arguments about how the historical center of the city should be transformed.” - @frankthielstudio

#FrankThiel is widely renowned for photographing the architectural spaces of Berlin, reflecting its turbulent social and political history. Thiel's monumental works are not merely documentation, but picture a city reborn after a tumultuous history. Thiel refers to Berlin as "the youngest city in the world" explaining, "the city suffers from an overdose of history…yet it does not suffer from its sediments like other European cities but from the consequences of its eruptions."
#SeanKellyNY #DigitalProgramming