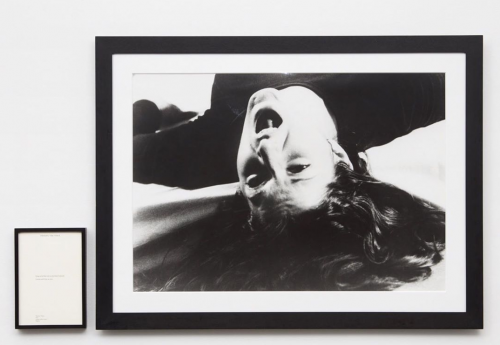 Today we go #InDetail with Marina Abramović’s ‘Freeing the Voice,’ one of twelve editions first issued by the gallery in 1994, that document the artist’s earliest performances from 1973-1975.

The actions documented in these early editions represent the nucleus of the canon Abramović has expanded upon and explored in her practice over the ensuing forty-plus years. #MarinaAbramović carried out these early performances before very limited audiences in galleries, public spaces and art festivals throughout Europe. These solo performances tested the artist’s limits of physical endurance, exploring ritual, gesture, even pain, to interrogate the parameters of art and challenge the fundamental relationship between performer and audience.

Each edition is comprised of a black and white photograph accompanied by a text panel that provides a narrative of the event depicted. Issued in editions of 16, these works were the result of years of extensive dialogue between Abramović and Sean Kelly, as they sought a way to preserve and conserve the original recordings that Abramović had carried around for years in a backpack whilst living out of a van and which were rapidly degrading. The two worked together to carefully choose a key image for each work, aware that once disseminated to a wider public, these selections would become the iconic representation of each historic, yet transient action.