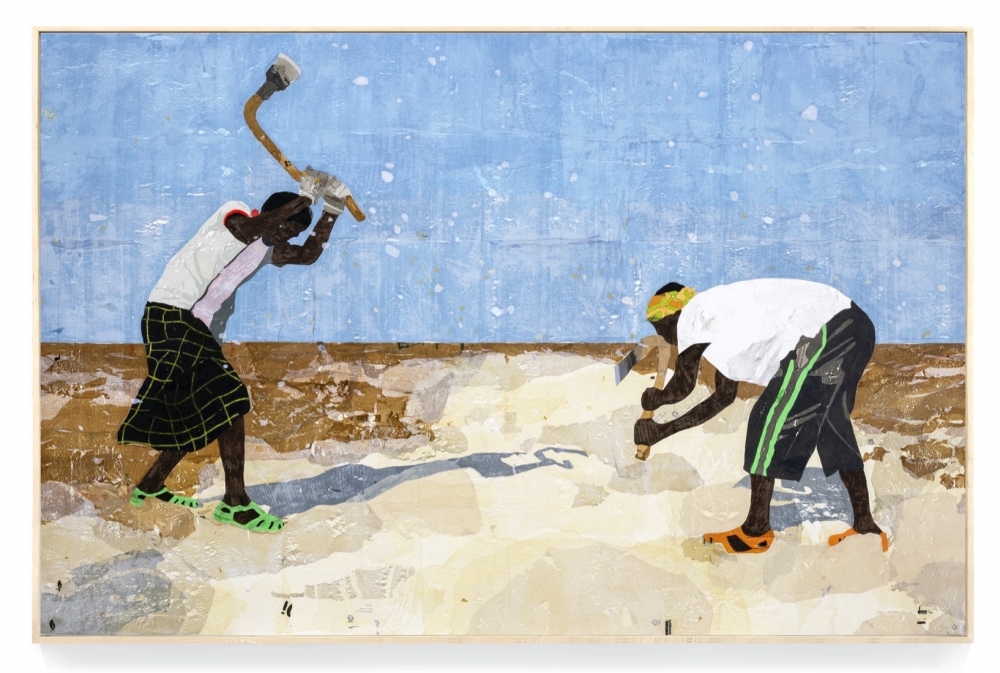 pass the salt, 2020 is from McCloud’s newest body of work, Burdened Man, which touches on notions of class through his use of single-use plastic bags. Abramović’s Self Portrait with Skeleton, 2003, is linked to her performance Nude with Skeleton, and is one of her most iconic images. Horn’s Der Sonnenseufzer, 2006, which translates as “The Sun Sigh,” is a classic example of the artist’s mechanical sculpture. Kosuth’s ‘Titled (A.A.I.A.I.)' [begin], [middle], [end], Webster's N.D., 1968, is an exceptionally rare example from his “Definitions,” series, a work whose apparent graphic simplicity belies its unmistakable philosophical and psychological complexity. Moyer’s Breaking the Line, 2020 is a new painting of variegated and multi-hued sections of repurposed black marble combined with hand-painted fabric in a unique composition. Dávila’s Untitled (Les Ménines), 2020, engages a deconstructed graphic which riffs on iconic moments from art history. D’Hollander’s unique works on cardboard reveal a newly found freedom of expression, previously unseen in her work. Wiley’s monumental sculpture Rumors of War, 2019, unveiled in Times Square in September 2019, before moving to its final home at the entrance to the Virginia Museum of Fine Arts in Richmond in December, has become an iconic emblem of the Black Lives Matter movement. Today this sculpture stands as an untarnished beacon to the future, as the very works that it was created in response to—the numerous memorials to the Confederacy lining Richmond’s Monument Avenue—are being permanently removed.