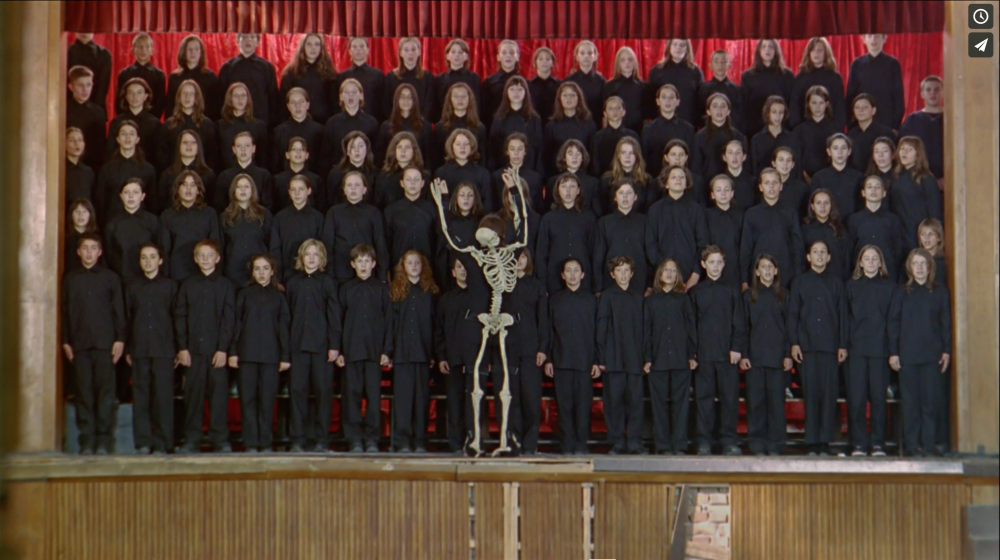 Today’s #FilmFridays feature is Marina Abramović’s film Count on Us (Chorus), 2003. Click the link below to watch on Vimeo for 24 hours from Friday, August 14 until Saturday, August 15.

'Count on Us' is comprised of four video channels: 'Star', 'Boy', 'Girl', and 'Chorus'. 'Star,' projected on the floor, depicts an aerial view of Abramović, lying on the ground wearing black clothes, her arms and legs splayed, with a skeleton lying on top of her. The projection is flanked to the left and right by 'Boy,' which shows a boy in front of a bright red curtain singing a poetic folk song about love, loss and longing, and 'Girl,' which is similar, but instead features a young girl singing. Between the two is ‘Chorus,’ which shows a children’s choir, dressed solemnly in black, conducted by Abramović, singing about the United Nations in Serbo-Croatian. In this projection the artist is also dressed in a black costume, now wearing the skeleton on her back. Visually arresting and powerfully moving, Abramović stated at the time the work was made that it was an emotional response to current political events.